Below is the link to our most recent version (Version 3.1) of our Collective Bargaining Agreement as of October 2020.

In regards to the penalties from this past season...

Since they were not announced or clarified prior to the season, we will be going with the following format:

Great work guys. One question: for salary penalties resulting in the loss of a 2nd rounder where a team has multiple 2nd rounders, which 2nd rounder is forfeited? The latest one or the earliest?

BizGilwalker wrote:Great work guys. One question: for salary penalties resulting in the loss of a 2nd rounder where a team has multiple 2nd rounders, which 2nd rounder is forfeited? The latest one or the earliest?

It'll be done the same way as when a 1st gets forfeited. It'll be the next 2nd rounder. In the case where a team has multiple 2nds coming up in the same year, the best 2nd rounder will be forfeited.
Top

1.2 Hard Cap
Should a team remain above the Hard Cap at the last day of the regular season, another 1st round pick will be forfeited, following the rules above. That means any team that breaches the Hard Cap will be obliged to make following moves to get under it if the team does not want to be penalized again.
Also, the team cannot get under the Hard Cap and then, by signing a veteran minimum Free Agent, breach into it again. This would be considering getting over the Hard Cap, and would be again penalized with the loss of a 1st round draft pick.

4.14 In Season Free Agency
For non-waived players, the signing will happen as first come - first serve, which means that the team that posts the singing first will be awarded the desired player no matter what.
For waived players, a 24-hour signing moratorium starting at when the player or coach was cut (The Simmer’s post serves as the clock referential) will take place in order to give all teams the opportunity to bid for the mentioned player. After that period, player is free to sign somewhere else, becoming elegible for the first come – first serve rule explained above.
Rules for coaches are the same in place for players.

5.1 General Rules
Players who have a player option cannot be traded in the window between the end of the season and start of free agency. Players with team options can be traded during this period, but the team option will then automatically be picked up.
Teams under the luxury tax before the trade may receive one (1) minimum salary player in a deal without needing to send any salary back. This only applies to one (1) minimum salary player trades, not trades where other players are involved on either side.

5.8 Rookie’s Rights Trading
Once a player gets drafted, his draft rights are eligible to be traded until last day of Free Agency. From them on, rookie's ratings will be revealed and all rookies becomes trade restricted. If a rookie's right is moved, it becomes restricted, just like any player.
#1 L.Ball #0 M.Louzada #22 M.Bridges #23 B.Bowen #21 M.Wagner
#25 K.Nunn #26 L.Kennard #39 E.Mika #50 Z.Collins

emplep7 wrote:Attached is the updated CBA for the league as of 11Jun2017. You can also try this link if the download doesn't work for you: https://www.dropbox.com/s/0jcdeenii7bqy ... A.pdf?dl=0

Bump for those confused by CBA
Top

The following changes were made:

- New hard cap policy
- Added multi-team trade rules
- In-season FA is 24 hours from the Simmer's cut post, and bids will be placed via PM to the Simmer
- In-season coach hiring matches in-season FA and is only 1-year deals.
- implement full raises onto any signing that doesn't include the minimum raises during FA
- Minimum salary contracts cannot exceed two years in length
- RFA contract offers must be at least two years in length
- Other minor rewordings of rules for clarification
Top

It was brought to my attention that the CBA attached to the post and the CBA in the dropbox were not the same. Both the dropbox link and the attachment are the same, current CBA now.
Top

Our CBA was in need of some updates so we have updated to a format that is more user friendly and have added/updated the following items:

Let us know if you have any questions, but this should make it easier to read/follow.

The CBA was updated to include the following changes:

Maximum Salary Guidelines (Set back to the previous CBA limits below)

The CBA was revised to include the following addition for clarity on roster management:

Each team has until the end of Free Agency until they must be at a maximum of 15 players. If for any reason a team is above 15 players prior to the last Free Agency period, the newest added players to that roster will be cut and their salary will be guaranteed (this includes rookies or recent Free Agent signings).

Additionally, all teams have until the first Regular Season sim to get to a minimum of 12 players. If for any reason a team is below 12 players PRIOR to the first Regular season sim, the roster will be filled at the Sim Teams discretion and the player salaries will be guaranteed.

Due to recent events and feedback from several GMs (all of whom were not involved in the thread in question) around recent comments made on the forums, the League Conduct Policy will be revised within the CBA effective immediately:

League Conduct Policy
1. While competition is expected and promoted within the league, it is a general expectation of GMs within the league that communication between GMs will be respectful (this includes both on the forums and within PMs). If comments by GMs become personal in nature (i.e., attacking the way a GM talks, writes, their background, family, etc), that GM will be immediately subject to the following disciplinary actions (without warning):

If the offense is severe enough, the Admin team reserves the right to bypass the first offense penalty and go directly to permanent removal from the league.

Additionally, since the Admin team does not see every post within the forums - if another GM sees something that they observe as a personal attack of another GM (or themselves), please report the post using the following button (see below) on the applicable post. This will bring this to the Admin teams attention to review against this policy. 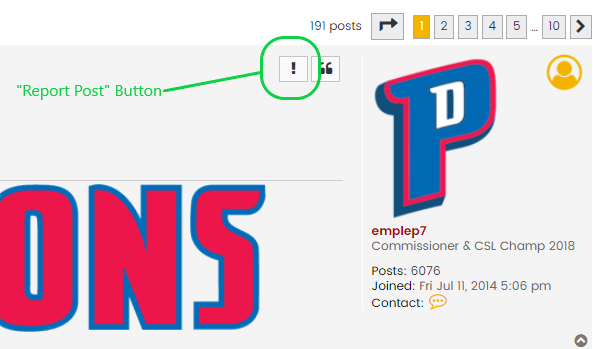 The CBA was revised to include the following:

1. Next Season Maximum Salary Raises (as specified this past offseason);

2. Offseason Coach Hiring
- This process will change moving forward to enable teams to budget for use of the Training Staff and pricing their own coaching staff. The total staff salary is still being tested and finalized for the upcoming season, but it is currently listed as $9 million.

There will be some discussion heading closer to the offseason here to enable teams to make decisions with their current coaching staff that are currently locked into their larger contracts.

Return to “League Rules and CBA”