Write updates about your team or the league here.
Post Reply
12 posts • Page 1 of 1

Picture this. It's New Year's Eve in 1999 -- at the box office, the Sixth Sense somehow comes in 2nd to the goddamn Phantom Menace. On the charts, No Scrubs finishes the year in 2nd behind Cher's "Believe." On the hardwood Tim Duncan, Dirk Nowitzki, and Kevin Garnett are ringing in a new era of basketball.

The era of the Power Foward had arrived.

I'm not sure that Michael Porter Jr. was even alive in 1999. Regardless, his game comes straight out of that underappreciated era of NBA ball. Though comparisons to all-time greats like Nowitzki & Duncan are probably too much, this season's expectations for the young Power Forward are very high. Give him the ball on the block, and he'll lose bigger defenders with his handles & quick step. Give him the ball 20 feet from the basket, and he'll shoot it over any smaller defender. It doesn't hurt that he expects to clean up the glass at one of the highest rates in the league. With his DRB, HDL, and SCR, I wouldn't be surprised to see Porter regularly go coast to coast on vulnerable defenses. It sure helps that Porter saw +7 boosts to both his SCR and DRB ratings this training camp, pushing them up to 82 SCR and 80 DRB.

If I had to draw a comparison to one of those NBA legends from the PF era, I'd probably wind up with Nowitzki. Like (a younger) Nowitzki, Porter can handle the ball, push the pace, and knock down a shot from spots unheard of by 6'11" bodies not named Durant. Also like big Dirk, defense is a little bit of an afterthought.

Are the Nowitzki comparisons premature? This season provides a chance for MPJ to make his name.

Porter is the face of the Pacers franchise. So this offseason was all about reinforcing his strengths + covering his weaknesses. The Pacers front office broke this down into 3 types of players:

#1 Low usage Centers that can block, rebound, and defend.
#2 Floor spacers that can give Porter room to operate & kick out when doubled.
#3 Bulldogs that can harass opposing players & cover Porter's defensive shortcomings.

#1: -- To pick up a low usage Center, we made the tough decision to trade team favorite Elie Okobo to Houston for Eric Mika. We really really wanted Okobo, but we knew that this was our window to build a team custom-made for Porter, and Okobo just wasn't the right guy for the job. Mika, on the other hand:
Mika
SCR: 42
PAS : 67
DRB: 76
DEF: 77
BLK: 74
Mika figures to be a little bit of an Erick Dampier to Porter's Nowitzki. Rebound, Defend, Block, Pass, and DONT SHOOT. With Mika besides him, Porter has a shot of eclipsing 20ppg.

That's a lot of dudes who can shoot the damn rock. Playing time & lineups will be a fun challenge for the coaching staff.

#3: And lastly, we reach the bulldogs. These are the guys who will lockdown opposing scoring threats, enabling Porter to take a lighter defensive load every night.
Rondae Hollis-Jefferson: DEF 91
Branden Dawson: DEF 77 DRB 76
Allen Crabbe: DEF 76
These boys are big, aggressive, and not looking to score. They're going to come in handy against teams with overpowered offenses. Hopefully, this is a team with NO SCRUBS.

New signing VanVleet will be one of a handful of Pacers expected to space the floor for Porter.

The Contract Year Gang
This season, there will be three Pacers entering contract years. All three are at interesting intersections of their career. So we thought it wise to say a few extra words about our expectations of them & how they will be used.

Honestly, we love Semi Ojeleye. He can do literally everything at a solid rate, giving us so much flexibility. Crucially, he seems capable of shooting the 3, draws fouls like crazy, and forces turnovers. He's one of the more efficient players we've ever had, though we think he has another level.
Hopefully, this season's more balanced roster will help Ojeleye get into a better rhythm. We will be working to get him more opportunities on the perimeter, with the hopes that he shoots the 3 more and racks up a few more assists. Ojeleye will once again be a starter and should expect similar MPG. If he can become a 15/5/5 guy, this franchise will be very happy.

In a weird way, Patton is going to be very important to the Pacers' success this season. With Mika as the only true Center, Patton is going to get minutes & a chance to earn his money next offseason. We love his shooting & his passing, but worry about his rebounding & blocking if he plays Center. That said, he could be a very fun big man in a small-ball pace and space lineup. So, we'll be testing that out to see if the new engine turns Patton into the perfect Center next to Porter & Ojeleye. If Patton can be the big man in a high-powered offense, he'll certainly be back here next season.

Ah the 6th sense. The 6th man. Alkins was probably overlooked in DDS3. Sure, he's only an okay defender & doesn't cause turnovers. But the guy shoots the ball incredibly well. Like scarily well. When Michael Porter sits, expect the keys to the offense to be handed over to Alkins. Surround him with some defense & get out of the way, boys. If Alkins shoots 42% from 3 again this season, a payday will probably be headed his way. 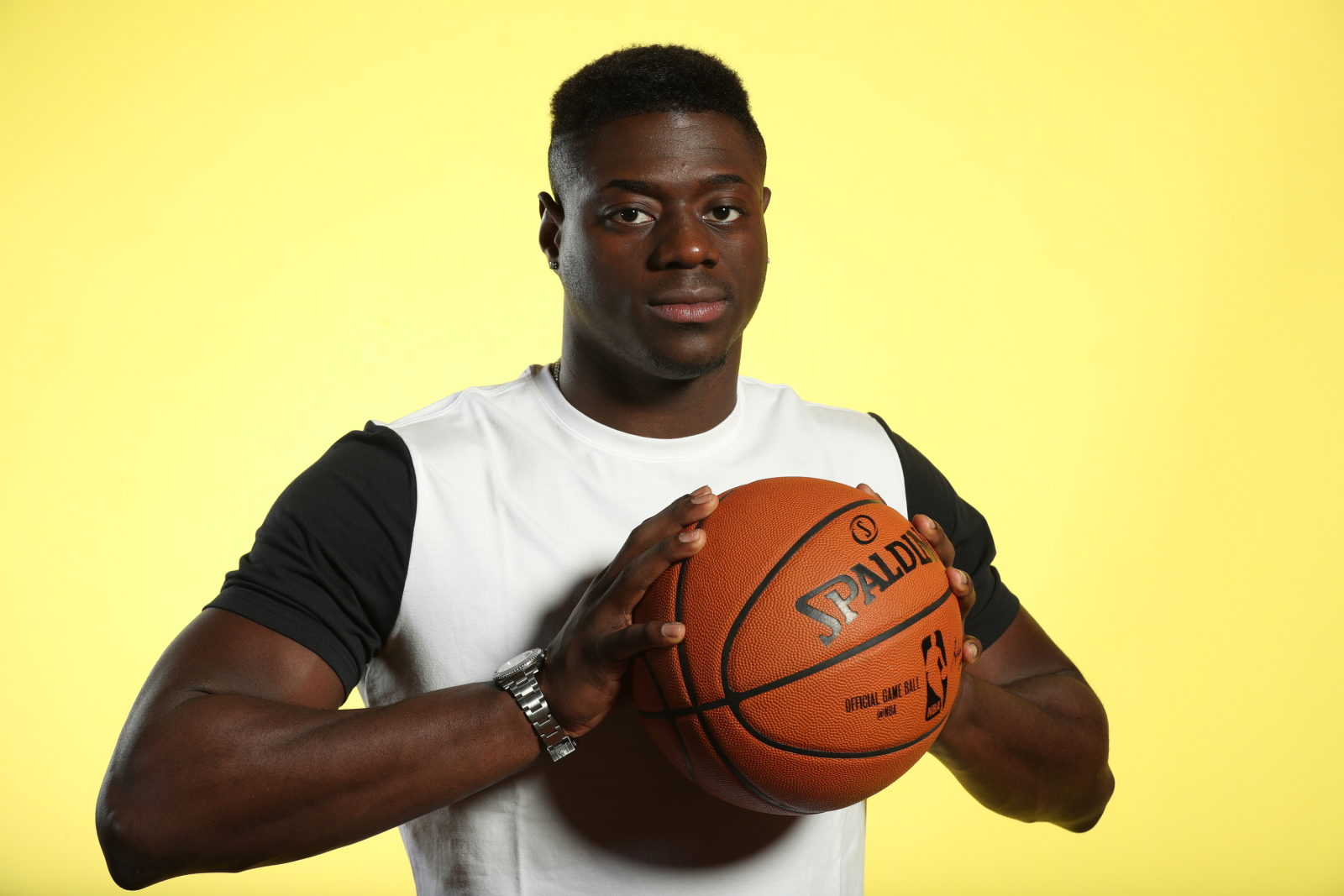 Can Alkins do enough this season to earn a big paycheck? He's yet to disappoint.

Team Prediction/Expectation
For the first time in a few seasons, it might actually be fun to be a Pacers fan. We own our own 1st round pick this year, so winning is not everything. Instead, player development & fit will be the team mantra.
That said, there are still a few goals for this season:

1) Turn Porter into a 20ppg scorer
Every decision made this offseason was made to maximize Porter's potential. Combine that with an excellent training camp, and there's no reason why Porter can't become a serious CSL threat in his sophomore season. If his game starts forcing defenses to adjust, then other players will get their shots & the wins will start to come together.

2) Have a winning record against the Central Division
This is a personal challenge. If the Pacers are going to be taken seriously again, then we'll need to start with our own very tough backyard.

Detroit is a pain in the ass and always whoops us. Going 1-3 would be fine, and 2-2 would be considered a success.

Chicago, despite reaching the finals last season, no longer has their stud of a GM. They do have Milos + AD though, so they can probably beat our team on autopilot. Similar to Detroit, 2-2 would be a big success.

Cleveland is old as shit, but still talented. They're a little tough to gauge right now, so hopefully we can get 2 wins and if we're lucky they hit the reset button and we go 3-1.

Lastly, Milwaukee is no longer a bottom feeder. They're probably on a similar trajectory to us, but doing so with far less roster turnover & more loyalty. The opposite approaches but similar trajectory could make IND-MIL game nights entertaining. So we'll see, we both don't want to be the Central Division basement team anymore.

If Porter becomes the second coming of Jayson Tatum, I can see this team pushing for a playoff spot. Well done here pushing your timeline in line with Porter's training camp.

But it will be an incredibly tough east with a couple teams not making the playoffs with positive records.
Stay Me7o

Porter is an elite offensive player. I like the shape this team is taking. I think you achieved goals #1 and #2 ... as for #3, I'm not so sure. The defensive rating alone can be misleading.

Looking forward to our matchups this upcoming season.

After some time without a clear direction it seems the Porter trade set the curse.
And the plan and off-season activity makes sense, the team has his leader, the pieces seem to fit and are plenty.
Time to test them out and find the right chemistry. Porter should be one of the best scorers in 19 besides Monk, Batum, Fox ...

Good luck and have fun!
Top

I really like the Pacers this year and you made some great moves. Porter is a stud and supporting cast looks good. I smell playoffs.


Man Olajuwon, Shaq, Ewing, Mourning, Robinson, Kemp, Garnett, Webber, Divac, Rodman, Malone, Duncan. Imagine all of these guys were in the league at the same time. And now?
So what do you expect when you draft Grabby McHolderson to play your right tackle?
Top

Flaming Homer wrote: ↑
Sat Mar 21, 2020 10:01 pm
After some time without a clear direction it seems the Porter trade set the curse.
And the plan and off-season activity makes sense, the team has his leader, the pieces seem to fit and are plenty.
Time to test them out and find the right chemistry. Porter should be one of the best scorers in 19 besides Monk, Batum, Fox ...

Good luck and have fun!

Batum? I assume you meant Knox?

Im not sure Porter can be a Nowitzki like player. I would make him a SF and let him rule the world playing the three. Actually I see a lot of Jabari Parker in him. At SF his defense even gonna be very solid. Not sure if 19 is close to 3 statwise, but his STL and BLK rating should be good for a steal and block per game. On top his HDL and Rebounding is elite for SF.

MPJ should ball out now with another training camp in the books. I think this team has some interesting pieces to go along with MPJ, curious to see if you will make any more moves during the season.
Cotton/Trice/Lewis
Harris/Holiday/Hunter
Hezonja/Gbiinje/Dotson
Rabb/Davis/Leaf
Allen/Anigbogu/Kabasele
Top

I questioned the move for Portee at first, but I was wrong. He should explode this season for you. Cover his weakness with defenders and a second star, and I see this team going far.

I hope Crabbe works out for you, he was a fan favourite here in Toronto! Porter trade was masterful and you have time to construct a team around him that works. You did well in FA as well, I love the Fred VanVleet signing.
Top

If Justin Patton has a chance at progressing it is in the new engine with a fresh start.
CSL: Brooklyn Nets (2018-present)
Top
Post Reply
12 posts • Page 1 of 1